Folks who run their websites on dedicated servers are familiar with SSH as a way to securely connect to their server from any location. A less well-known aspect of SSH is built-in support for tunneling – which can be simply explained as “built-in proxy server”. As the article I’ve linked to in the previous sentence succintly puts it tunneling “is a way to forward otherwise insecure TCP traffic through SSH”.

If you have ever been nervous about using public Wi-Fi for anything other than checking the news, you should definitely look at SSH tunneling. I use SSH tunneling to access websites that run on high port numbers (CPanel, HyperVM etc.) through my corporate firewall that only permits basic HTTP traffic otherwise.

On the Windows side, PuTTy is the most popular SSH client – being freeware and extremely light on memory and disk space are huge pluses. That said, I’ve found PuTTy to be rather lacking in tunneling support – 1) the application tends to buckle under several simultaneous connections and 2) it lacks any sort of built reconnection support, which is a basic requirement for proxying.

A little bit of searching around lead me to BitVise Tunnelier – a free for personal use SSH client that offers superb tunneling support. It also has a couple of other nifty touches that I like, but let me start off with the basic login window: 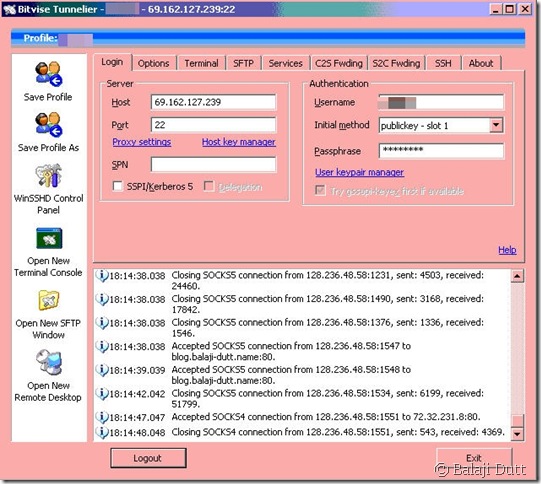 This is the second clue that tunneling is a big part of this program (the name being the first clue 😉 ) – a log window of all active connections and traffic going through the application. Most of the other features in this window are available in PuTTy as well, but it’s definitely presented in a more accessible way in Tunnelier.

Let’s take a look at how to setup proxying in Tunnelier: 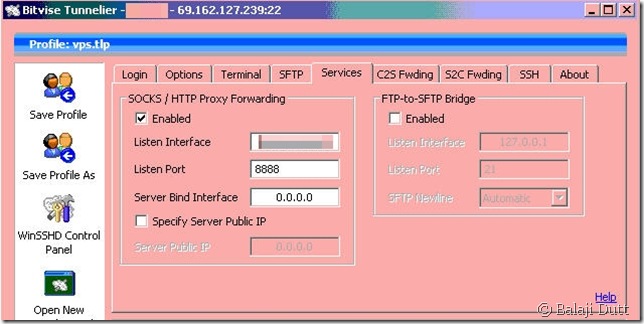 Ah, this is so much better than PuTTy’s cryptic “dynamic” port setting. Not much else to talk about here, so let’s move onto Tunnelier’s screen for setting up port-forwarding.

Before we get there, it’s worth noting that port-forwarding really is some technological black-magic and most explanations have left me pretty confused, so here’s my stab at clearing up what Port Forwarding is – through SSH magic, Port Forwarding allows you to connect to a port on a machine in your network and have that connection automatically relayed to a different server on another network that you would not be able to reach otherwise. I hope that helps 🙂 , because that might help explain this screen a little better: 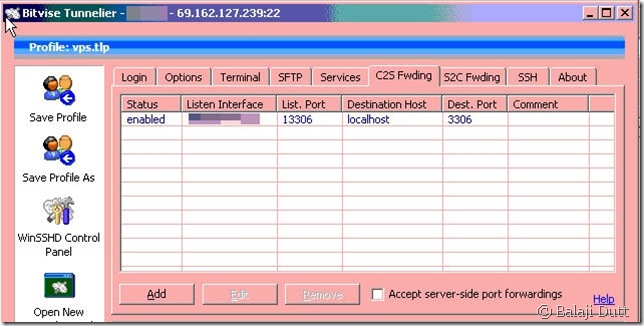 In my mind, this is probably the worst UI screen in Tunnelier – it wasn’t really till I understood how port-forwarding worked that I actually wrapped my head around this screen. I do wonder if maybe a wizard might have helped here.

To wrap-up this show-and-tell session, let’s look at the SSH/options window: 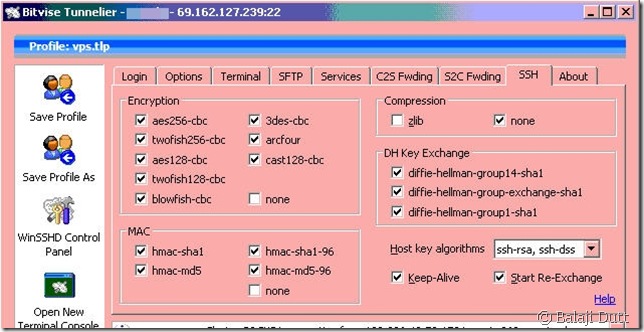 Just to point out that Tunnelier offers not one, but two different settings to ensure proxying doesn’t break – an automatic reconnect option and a Keep-Alive option.