I’ve been on a Christmas-break of sorts and as is typical for such “holidays”, one chore I had to complete was procure parts for a vacuum cleaner – something I don’t have time for on most weekends.

After an incredibly long and frustrating series of phone calls with Sharp Singapore’s “Customer Service”, I tracked down a shop somewhere in Katong that would sell me that part. Since I had a little bit of time, I decided this would be a fine test of Internet directions in a real world scenario. I would rely on:

As should be clear from the array of tools/sites above, I’m not very good at navigating this city. Unfortunately, that did not improve despite all the preparation I had done.

Let me start with finding a route – my first try at getting public transport directions from gothere gave me a set of directions that involved me taking 2 buses – including one to Changi Airport (!) and would optimistically take around 2 hours each way. I tried changing my starting point to another location a couple of train stops away and voila – a completely new set of directions that were much simpler and would take about an hour. Why the instructions would change so radically when all I had done was move my starting point a couple of stops along the same MRT line was beyond me. (( I did email the gothere folks about this and they replied shortly thereafter to tell me that the weird directions are due to a bug in their journey planner system ))

The first stumbling block I hit was when I got off the MRT:

So here’s my thought process when I see this direction:

“Raffles Hotel is on Bras Basah Road? But I thought it was next to Raffles City Shopping Mall!”

So I launch Navizon and now I’m thinking:

“But wait the map shows Stamford Road running top to bottom and I’ve got Stamford Road in front of me left to right” (( If you look very carefully at that screenshot above, you can see the gothere map is identical to the Navizon map I’m referring to ))

“Maybe if I walk down further…”

At this point, I swallow my geek pride and ask the Doorman at the Swissotel for directions, and he kindly points out I’m essentially standing 10 meters away from Bras Basah Road and the Raffles Hotel.

I get to the the bus stop and check SBSNextBus for the arrivals. My faith in the Internet is restored when I see a bus marked as “Arriving” on the site and look up to see it pulling in to the Bus stop as well…

After a short bus ride, I get off the Bus Stop that gothere has recommended and suddenly realize that the printed directions don’t have direction arrows: 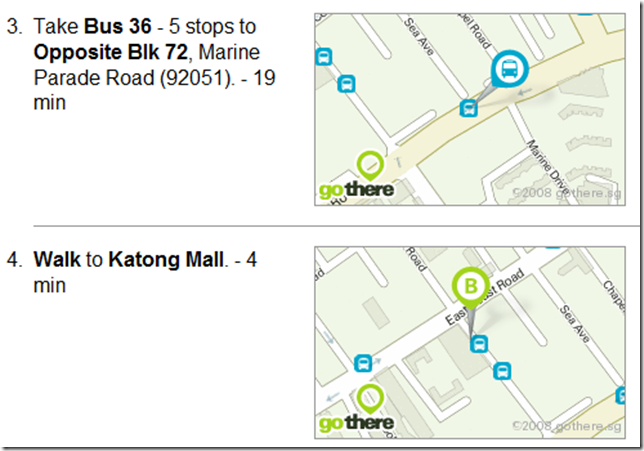 I have a hazy memory that the main map recommended turning onto a road and walking down to find the place: 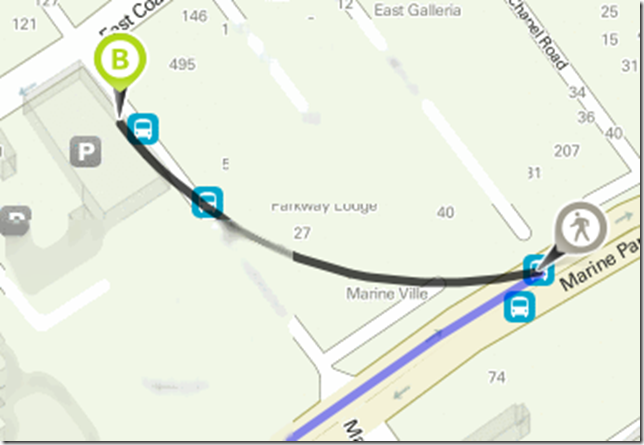 Note: Blurring above is to simulate my recollection of the map and is not a bug 🙂

So I look around for some clues and hey, whaddya know? A nice big road sign: Perfect! I turn left and I should be there! After all, even gothere said I have to turn “somewhere”. Except, by the time I saw this sign, I was already walking the wrong way. That become very clear when after a couple of hundred meters, all I could see were HDB flats all around. I ask a lady for directions and she suggested I cross the road and take a bus.

At this point I’m thinking “Man, those gothere directions were just waaay off!”. Check SBSNextbus again and find out that the bus I’m waiting for is 35 minutes away. I concede defeat and hail a cab…………

…who drives me a couple of hundred meters past where I got down (see that map above?) to drop me off in front of the store #^&@! He also tells me “Don’t ask people for directions lah! They don’t know the place at all…”.

I pick up the parts and start walking back to the bus-stop for my return leg using gothere. SBSNextbus told me my bus was 10 minutes away, except when I turn onto the main road – there goes the bus I was supposed to catch. I know that SBSNextbus doesn’t claim to be accurate, but you have to imagine I wasn’t very pleased at that moment after all I had been through.

Get to the bus-stop and check SBSNextbus again, which helpfully informs me the next bus is 40 minutes away #^&@! I start going through the individual bus routes at the stop and finally figure out an alternative route that will get me near the MRT, but I would have to go an extra 5 stops on the train #^&@!

So 3 hours after I had set off from home (Remember that optimistic estimate of 1 hour each way that gothere had predicted?) I finally get back hot, thirsty and very very annoyed.

Now I’m sure a bunch of you are rolling on the floor laughing and going “What a loon! He couldn’t read a goddamn map!”. But hey, most folks who look up directions on the Internet are looking them up precisely because they can’t read those goddamn maps.

1. Orient the map to the way I’m standing and not the other way around – If you know where I am and which way I’m standing (that’s what the GPS tells you innit?), it should be relatively easy to flip the map around to match what I’m seeing in the real world no?

Obviously this isn’t possible for online direction maps but you can do one thing – you can tell me which way the map is oriented! Go back up and look at those gothere maps. Can you tell which way is up? In other words, if you are telling me to “walk down and to the right” you need to tell me in your map which way is up. Otherwise I’m going to look at street signs which probably don’t match your directions.

2. Don’t pull a switcheroo – when I went to print the maps in gothere, all those friendly direction lines disappeared forcing me to rely on my recollection of the full directions. Again, if I could remember my maps that well I wouldn’t be printing out a set of directions now would I?

3. Offer alternates – Obviously, the algorithm that picked the route for me knew about other options. It’s possible that I might miss a connection somewhere. It would be helpful if you could provide an alternate for each connection in a second set of directions. 90% of the time I won’t need it, but that 10% I miss my bus? I would kill for having a second set of directions all ready to go.

So that’s my rant about getting directions on the Internet – or how I suck at reading directions (you choose). Oh and in case you were wondering, I bought plenty of extra spares for that vacuum cleaner.