A combination of events got me starting the New Year reflecting on attention and personal creativity.

The first event occurred while listening to an episode of the Brainy Gamer Podcast.  At some point during the podcast, every journalist interviewed mentioned being on Twitter. Having found their viewpoints interesting, my first instinct was “Hey! I should go follow all these folks on Twitter”. But then  the thought of adding another dozen high-volume tweeters to my already over-busy timeline just made me quail.

Even as I pondered what was my S/N cut-off for Twitter, I found myself in a fairly unique situation – without any podcasts to listen to or books to read on my train ride to and from work for almost 2 weeks. At first, I fidgeted and checked Twitter obsessively on my phone. But then a fairly remarkable thing happened – a number of ideas and observations started going off in my head. It seems like my brain has been itching to think on its own for months and I’ve been drowning it in too much information instead 🙂

Apparently, I’ve been deluding myself into thinking I could handle all the information flowing my way with no problems. Now, this is a pretty common complaint – “There’s too much to read!”. The stock answer is pretty easy as well – “That’s because you haven’t figured out how to filter the really important stuff yet”. AKA Filter Failure.

The lack of tools to help me build the right filters is something I’ll come back to later. But what I really noticed from this information overload was how it was affecting my own creativity. A constant minute-by-minute decision of “Read? Don’t Read?” that left me curiously unsettled after an hour or so of going through my feeds. As Laura Roeder put it: 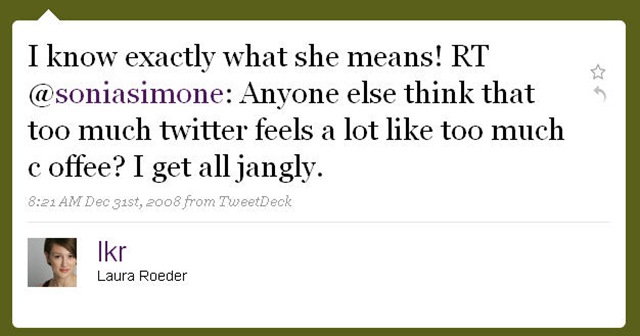 After spending an hour-and-a-half going through my feeds, simultaneously twittering links and posting articles to my link blog, I’d find myself distracted and twitchy. To the extent that I would not be able to bring myself to start writing and dawdle at some website or the other until it was time to shut down the computer and go home.

It seems like I have reached an inflection point – I could continue as I had for the last year or so, adding to my reading list and twitter all the time ,while spending less and less time actually acting on all that knowledge. Or I could take a good hard look at what I was really interested in and focus on that instead.

What am I really interested in? That’s a hard, hard question – ask yourself this “What’s something I really, really like; have fun still doing; but don’t have the time anymore for?”. For me, a couple of things became obvious – one was Gaming and the other was Technology.

Gaming was my first big Geek love – I fondly remember those endless hours spent playing F-117, AoE, AoK, Caesar III… At the same time, I realized I haven’t played a game even half-way to completion in years. Gaming news tends to be a real fire hose as well- even if I limited myself to PC gaming, the updates would come thick & fast and often I’d barely glance at the headlines. So this was the first category to get cut – something made easier by the fact that I still listen to a couple of gaming podcasts.

Making sense of my passion for technology was much harder. I had tried to compensate for feeds with endless updates by switching them to headlines-only mode. The thing is – once I switched to headlines mode, I’d find myself only reading articles that have “interesting” headlines. It felt like I was becoming that mouth-breathing, linkbait-sniffing Digg fanboi that I so detest. Or it could be I had just validated Sturgeon’s law – “90% of everything is crap”.

In the absence of a more scientific approach – I went with my gut instinct. I moved a few feeds into the doghouse (literally):

Once I’d done that – I forgot about them. Didn’t check that folder for days – kept hitting the “mark all as read” button. After a week or so, I realized that at no point did I feel like I was missing something by not reading these feeds. With that realization Lifehacker, NY Bits and a few others were consigned to the trash bin. A minor victory over information anxiety!

Earlier in this post, I complained about the lack of a scientific way of choosing which feeds I don’t want – and that wasn’t a joke. Buried within the FeedDemon UI is a way to check my “attention” score for every feed I subscribe to. When I did check this for my Tech feeds, I was extremely surprised – BoingBoing was first by a wide margin, with kottke and Daring Fireball in distant 2nd place. That pretty much told me the attention scores were all wrong, because here’s my “attention” gut-check: 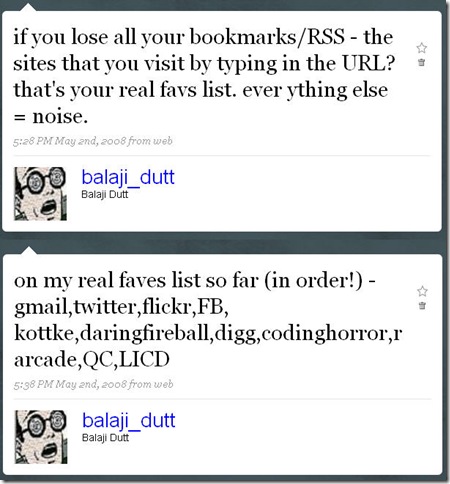 I think what is missing is a more “semantic” attention score. What are the topics I read the most? What keywords are common across the article I’ve added to my shared folders? I think that I love reading about operating systems, design and odd facts, but do my reading habits support that belief? I feel like if I had this sort of information, I could simplify my reading list some more.

How long will this new approach last? Too early to tell yet – but certainly, being able to go through my entire feed-list in less than 1 hour last Sunday felt great. So does the Rescuetime graph that tells me I’ve spent just 30 minutes on average in my Feed reader during January. But if my notebook is any indication, I think my own brain is thanking me the most 🙂

7 Responses to "Information Overload and Creativity – Simplicity is the key"