1. Broadcast your location to your friends and FoaF network in the hope of making unexpected connections; and

2. Share comments and rich media (photographs, video, voice etc.) about your experiences at a particular location.

This then, is the state of my location networking experience one year on: 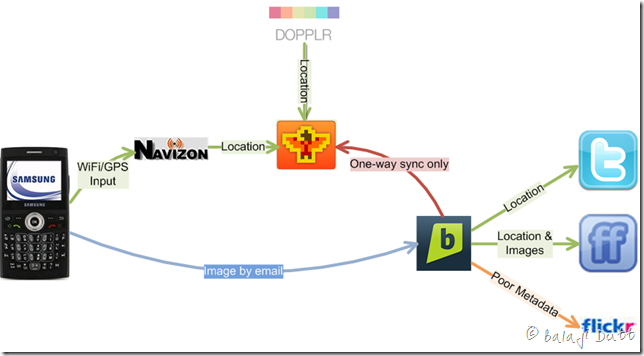 Two problems have remained stubbornly unresolved for that entire period

1. The lack of two-way sync between Brightkite and Fire Eagle – While I can understand why Google Latitude won’t play with Fire Eagle, I’m puzzled by the reluctance of the other players in location networking like Brightkite and Foursquare to integrate with Fire Eagle. Integrating with Fire Eagle would allow location-networking providers to stop worrying about how their users send updates to their service and focus on making the experience more fun to use. Instead, all the players in location-networking are guilty of listening only to the echo-chamber hype of early adopters and providing solutions only for the platforms the geeks love, i.e., the iPhone, the Blackberry Bold generation and the Android OS. This is remarkably short-sighted considering:

a. While the iPhone is the fastest selling Smartphone today, it still isn’t beating older Blackberries, Windows Mobile or the Palm OS in terms of installed base.

b. No Smartphone is coming close to beating the "dumb" cell phones install base

If location-networking is to really become as ubiquitous as social networking, it has to run on a variety of platforms and require little by way of a hardware minimum. The promise of location-networking, to open your phone and see the location of not just your friends but of your FoaF network is truly remarkable. But meeting only the needs of the echo-chamber will keep location-networking a niche product, until it is killed off by the geeks who abandon it for the next cool thing on the horizon.

2.  The lack of rich metadata for any media shared through Brightkite – Let’s ignore the fact that Brightkite does not support video uploads to Flickr (despite the fact that Flickr has had  video in place for over a year now). No, my complaint is about how little metadata is passed to Flickr when I send a photo to Brightkite.

Using the Email Subject line as a description isn’t a very great idea either – why can’t we specify the Title via Email Subject and the description via Email Body? Isn’t that more logical. The lack of tags means these images are going to be very hard to surface via search. All in all, it’s a very limited and clunky solution for something a lot of other products do very well.

3 Responses to "On the state of location networking"